Hello, everyone! We at Team Visionary hope that you’ve had a great week. Today, we have a spectacular list of the best Minecraft tech mods for you guys.

Minecraft is one of the most popular games in the world today, and it’s no wonder. With its flexible and replayable gameplay, it’s a treasure trove for all sorts of gamers. Whether you like braving the dangerous dark deep in the mine in search for the shiniest ores, or if you spend most of your days relaxing in fields of wheat, you can enjoy Minecraft at your own pace and in your own way.

One of the things that make Minecraft so fun is, inarguably, the vast variety of blocks, items and mechanics in the game. Every update adds a ton of them to the game, along with new mechanics and functionalities along with. The recent 1.14 “Village and Pillage” update also added a ton of new machines — useful blocks such as barrels, functional structures like the cartographer’s table and stonecutter, and lots more. These, when used together with blocks such as hoppers, can allow for unprecedented levels of automation and flexibility. This added a whole new dimension to Minecraft, especially for players who enjoy games like Factorio and other micromanagement games where automation is a huge aspect.

So, naturally, there are hundreds and hundreds of mods that enhance, change and add to the various machines that we find in the base Minecraft game. Today, we’ve compiled a list of our favorite mods that introduce new machines, tech, gadgets and the like to Minecraft, whether it’s a quality of life update for existing ones, or one that adds in dozens of new mods. 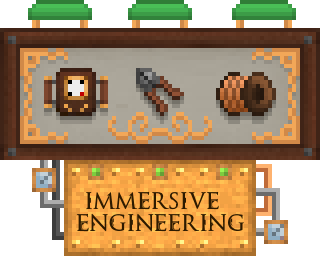 Immersive Engineering does exactly what it says on the tin: it immerses the player in incredible, realistic engineering technology in Minecraft. It offers many useful blocks that both look and behave almost exactly like their real-life counterparts. Most machines in this mod are multi – block structures, meaning that players must built the machine physically with various factory and machine blocks in order to have it function. This adds worlds of realism to the gameplay, and it’s especially satisfying to toil over a complicated multi – block structure and finally have it work exactly the way you want it to.

Some of the most popular machines offered by Immersive Engineering are the useful “crushers”, which can process ores with much more heightened speed and outputs by crushing the ore into smaller chunks and smelting them. Another great one is the excavator, which offers animated mining yet avoids the common pitfalls of other mods, which commonly use lasers and quarries to mine. In this mod, however, it actually creates a massive wheel that digs right through the ground, similar to excavators in real life.

The mod also has an extremely unique way of transferring power — similar to real life, Minecraft players will have to create power lines in order to connect all your machines into one large, central network depending on where and what for you need your machines. It even adds realistic means of power generation, such as water wheels for those seafarers out there, windmills for bases that are higher up in the mountains (how cool is that!) and biodiesel for those who have made their homes nearer to forests and biomes where entities might spawn.

DIfferent machines also use vastly different amounts of energy, so you’ll have to plan around it! Ensure that your power network is using the right voltage at all times (low, medium, high voltage converters and powerlines). The mod is fully compatible with RF energy, which is the most commonly seen energy type across almost all tech mods and is very compatible with any other mods that utilize or produce energy. This mod also offers block that convert other forms (EU) of energy into RF, which is always a big help whenever there’s a discrepancy in energy types.

Industrial Foregoing is a fantastic all – in – one tech mod that works for a ton of applications and will generally cover all of your regular gameplay needs by eventually automating them fully. The mod itself covers various machines for every possible need, from energy generation to storage. While it comes with its own special form of energy, Tesla, all machines from the mod will still take every form of energy from major tech mods, such RF, FE, and even Mekanism’s energy.

All machines also come with a nifty new UI that always displays everything you need to know about the machine in it. For instance, all machines show their energy on the left side and a “J” button from the top left that shows which blocks and recipes the specific machine professes. If you hover over the energy. Plus, his mod offers a massive tech tree to progress through Most machines require plastic, a new resource that can be processed through trees.

In all, Industrial Foregoing adds machines for every occasion (sowers and gatherers for farming,ranchers and breeders for animals, mob crushers and slaughter factories for mod farms  and many more.

Mekanism is a great independent tech mod that adds a variety of fun and functional things to your minecraft worlds Mekanism is one of the tech mods that doesn’t really have a goal(as in a progression based mod such as the previously mentioned industrial foregoing which has a tech tree that you need to work through) in mind, but rather helping you to focus of this mod is to add a suite of low-high tier of machines and tools to help elevate your worlds and just simply have fun

Plug and play tech mod where you just build whatever you need/ whatever you want Offer all the fun stuff that everyone wants such as incredibly cool jetpacks and cute robots that serve no other purpose than following you around! The mod also offers al the technical and complicated stuff you’d come to expect of a technology mod, such as digital mining robot machines which you need to program their path and actions and fusion reactors for the people who want to generate massive amounts of energy.

The mod adds a ton of stuff that helps you save time and make life easier, such as transmitters for all your resources (liquids, gasses, energy and items),and a very inclusive system for all your logistical needs (advanced item systems for sorting and filtering all your items). Mekanism is tier-based, but unlock other mods, the tiers only represent how fast and efficient the machines are. For instance, you can make an ore processing factory as soon as you start the game, this would be your lowest tier. However you can also make an elite ore processing factory which is the highest tier and it does the same thing except it can process 7 items at one time rather than 1.

Mekanism is one of the most popular tech mods on the market and it’s not hard to see why. It’s overall a great mod that covers all the need for your average everyday player and for every tech enthusiast

For everyone who does not  want to deal with the troubles of making and placing hundreds of cables and power line to power your machines, Flux Networks is here to save the day! It introduces networks tat you can make to store and remove energy from, sort of like a wireless bank! It offers automatic energy conversion across almost all tech mods, allowing for  wireless energy.

Just to add more content, Flux Networks also adds the ability to add personal networks into the game with password protection. This mod allows you to micromanage your networks and define which connected machines will get priority over the other machines. You can have multiple networks setup per world (each require their own controller though)! Customize your networks (change name and colour, set who can access the network, see how much energy is being removed/added). This mod also provides the ability to chunk load at each connection point.

In all, it’s a fantastic supportive mod for any modpack or playthrough that comes with tons of energy requirements and machines.

Another insanely popular mod, Ender IO is a great addon mod to any list of tech mods. Firstly, it’s worth noting that this is an Independent mod. What this means is that it adds no new ores or things that require worldgen, therefore you can add it to any world you are playing without a problem!

Ender IO adds new alloys made with existing metals,cool new armours and unique tools. All machines are upgradeable with various tiers. It also adds in Grains of infinity, used instead of redstone for most recipes(grains of infinity is a new resource which you can get from setting bedrock on fire).

In terms of content, EnderIO adds in cool new powered armour(dark armour is just like normal armour until you start adding modification to it, you can empower it with awesome effects such as – glider,super jump,faster swimming,speed,night vision and more). New and improved tools (dark pickaxe,dark axe,endersword) are also upgradable and rechargeable

Of course, all the machines in this mod are also compatible with other mods. For instance, the SAG Mill processes ores from other mods easily!

Part of why Minecraft is so incredibly appealing is its nostalgic quality, the familiarity that you can load into your new world and know exactly how everything works, know exactly what you want to do.

However, sometimes, what makes Minecraft so appealing is that it is what the player makes it, that it’s so receptive to player creativity. And nothing demonstrates player creativity like player-made mods!

Whether you’re a seasoned engineer or just looking for something to enhance your base, we hope that there was something that caught your eye on our Best Minecraft Technology Mods guide.