Hello hello, readers! Today, we at TeamVisionary are bringing you something a little different from the posts that we usually publish. Today, we’re exploring our new partnership with GamerSafer, a software created to ensure the safety of gamers across the world — such as yourself!

A software company based in California, GamerSafer is dedicated to providing online safety, as well as a positive and fair play experience to the millions of players who partake in online gaming across the globe. Armed with the newest and most exciting developments in technology, it offers a heavily customizable solution built with the diverse ecosystem that is the internet today in mind. From educational games for schools to Minecraft servers, from scalable MMOs to small indie development studios, GamerSafer is certain to offer a solution to any sort of player safety problems.

The company builds safety tools for the gaming and eSports industry to enable proactive intervention from the perspective of the developers, administrators, moderators and publishers of online multiplayer video games. The tools that GamerSafer provides these parties are certain to promote a player – centric approach when it comes to the game’s user experience, and will help to cultivate integrity and trust between the players themselves, as well as between the players and the creators of these games.

Unlike many companies out there, GamerSafer puts its money where its mouth is, reaching out to large organizations to ensure that their solution is truly making a difference in the world and promoting safety for all players, including younger and impressionable children who are more sensitive to severe risks and challenges that comes with online gaming.

To better explain what the solution and the company does, let’s delve a little into a problem that plagues almost every online community there is—

If you’re reading this blog and frequent our site, it’s probably not a far stretch to assume that you have, however casually, dabbled in online gaming, whether on relatively casual games like Minecraft, or more competitive games such as League of Legends, Apex, Valorant, and the like. One common thread of criticism can be applied to almost every online gaming community in the world — and usually the bigger the community, the more prevalent this line of critique applies — and that is the toxicity that usually finds itself permeating even the most cheerful and happy of online games.

There are many, many ways in which toxicity can manifest itself in these online communities. Of course, we have your standard spamming of slurs, insults and threats which can be enough to make the online experience unpleasant for even the thickest – skinned players. Other than these direct displays of hostility,  “BM-ing” — standing for “Bad Manners”, and meaning to emote, speak, or otherwise display body – language on your character that would convey disrespect or an insult — is also an especially prevalent way of indirect toxicity.

Of course, toxicity does not always equate to rudeness and insults. Sometimes, it can manifest in the manner of cheating in these games. Players often install third – party software, utilize macros, trainers, and other hacks to give themselves an unfair advantage over the rest of the playerbase. Though this can be frustrating on its own, these players often also use this advantage and the resulting victory as a chance to further taunt the players they’d just unfairly defeated.

All of this can certainly create a hostile environment that could dampen, or even completely ruin, someone’s experience of online gaming. After all, if you find yourself starting a new game and trying to practice in a PvP match, and all you experience are insults and hostility, match after match, due to your inexperience, you might even find yourself quitting. For instance, I know that I play games to unwind after hours of work — and so my enjoyment of the experience would certainly be at an all time low in such a case.

Perhaps you have been the victim of such behaviour. Perhaps you’ve been a perpetrator of these actions, even, a long time ago back when you didn’t know any better. Regardless, it’s inarguable that it’s an extremely large problem as of today’s day and age, where online communication has become the norm.

This study done by the Anti-Defamation League, which GamerSafer works closely with, shows the unfortunate cold, hard stats — that over 74% of internet users have experienced some form of harassment while playing games online. 53% of people who reported experiencing harassment said they were targeted for their “race, religion, ability, gender, gender identity, sexual orientation, or ethnicity. 38% of women surveyed said they were harassed on the basis of their gender, and finally, 35% of people surveyed who identify as lesbian, gay, bisexual, trans, or queer said they were harassed on the basis of their sexual orientation. When you take into account the amount of gamers that interact with strangers online on a daily basis, that’s a lot of people whose experiences are being negatively affected!

So, why is it that online gaming communities usually devolve into a platform for toxicity to grow? Why is it that in any sort of game with competitive gameplay, you’ll see players attacking and disdainfully taunting both opponents and teammates alike for trying too hard, for not doing enough, for playing wrongly, for not listening to instructions? And why is it that even in cooperative games, you’ll see players creating competition where there isn’t any, taunting and insulting each other for not performing as well as themselves?

On the internet, you have near – complete anonymity to the everyday people you interact with. No one knows the face and individual behind the account ShadowGamer132, and vice versa; the people who know ShadowGamer132 in real life probably don’t know his online alias, either. Because of this, there are many who feel emboldened by this shade of anonymity. After all, when there are no consequences to your words and actions, it’s easy to try and push limits.

Whether these toxic users are simply immature, or using the online platforms as a way of blowing off steam and releasing negative emotions that they might be suppressing due to in – real – life situations, it remains that as of right now, it’s extremely easy for them to do so without any consequences. In the rare cases where toxicity is punished in massively multiplayer online games, the users can usually just create another account. Using a VPN, these users can even create alts (alternate accounts) specifically to troll and cause trouble on online platforms and games.

As a result, certain online spaces have become safe havens for cyberbullies, scammers, hackers, cheaters, and all sorts of bigots to spew their toxicity. Though most offer some kind of report function for problematic and abusive users, it’s not unusual for a sizable amount of them to slip through the cracks, or for the mods to become so overwhelmed that they only target the severe cases, leaving tons of trolls and hackers to wreak havoc upon the gamers who are just there to have a good time and unwind.

However, what if these people finally find themselves held accountable for their harmful actions and words? What if these toxic users could be locked out of creating more alternate, throwaway accounts; if the platform staff were empowered to uphold their community values and celebrate positive and engaged players, rather than spending time repeatedly permanently banning the same toxic actors? Certainly, many, many gaming and online communities would become cleaner, more pleasant environments to game in. And that is exactly what GamerSafer aims to do!

GamerSafer offers a comprehensive, player – centric and accessible solution to severe toxicity and hatred. They do this in a wide variety of ways, covering all the bases as extensively as possible and ensuring that whether you’re a game developer, publisher, moderator or simply a player, you’ll be able to enjoy a welcoming and safe game environment — just how a hobby that the vast majority of people use to unwind and relax with should be. Here are just some of the few things that GamerSafer’s intuitive solution offers:

GamerSafer uses liveness detection and facial matching to verify and authenticate player identity while keeping your private data private. This means that hackers and cheaters no longer have infinite chances at ruining your game — they won’t be able to just create alternate account after alternate account after their ban, since they’ll need to authenticate their identity with the servers upon making a new game.

This sort of further authentication model will also help game administrators and moderators to more easily keep track of user reports, since the leagues of hackers, cheaters and otherwise toxic players will be very quickly thinned out after their first few offences. 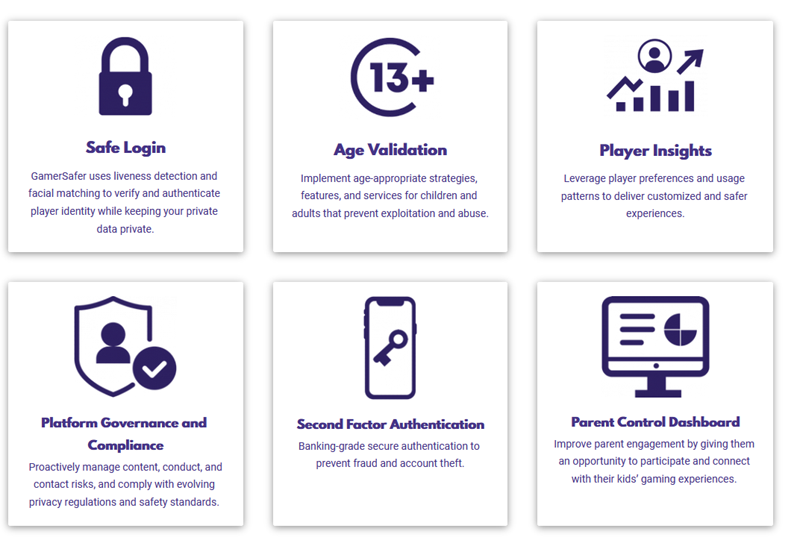 GamerSafer also implements age-appropriate strategies, features, and services for children and adults that prevent exploitation and abuse. For quite a lot of children, teens and young adults, the internet has become a part of their daily lives. The unfortunate side effect of that is that younger folk will get exposed to content that is in no way age – appropriate; and on the flip side, people with malicious intent can also much more easily access communities of younger children and teens.

Whether you’re a concerned parent, guardian or sibling, or a game developer that wants to target a certain audience, it’s essential for games nowadays to have good age assurance solutions so that children can avoid

This intuitive solution also helps you improve your game by collecting and organizing accurate data from your players. Leverage player preferences and usage patterns to deliver customized and safer experiences.

Finally, as mentioned before, GamerSafer puts a hefty emphasis on the more impressionable gaming population — kids and teens. If you’re a parent, guardian or tutor with a tech – savvy child, you know that what your child gets exposed to on the internet is always a huge concern. If you’re a game developer, you know that parental concern is a factor that you must address in order to promote good public relations. Improve parent engagement by giving them an opportunity to participate and connect with their kids’ gaming experiences!

Getting Started with GamerSafer

So, after all is said and done, how do you get started? If you’re interested in utilizing this intuitive solution for your own game, or for yourself — or if you want to learn more, please don’t hesitate to contact GamerSafer for a demo, quote or with any questions. You can do so at their website right here at gamersafer.com!